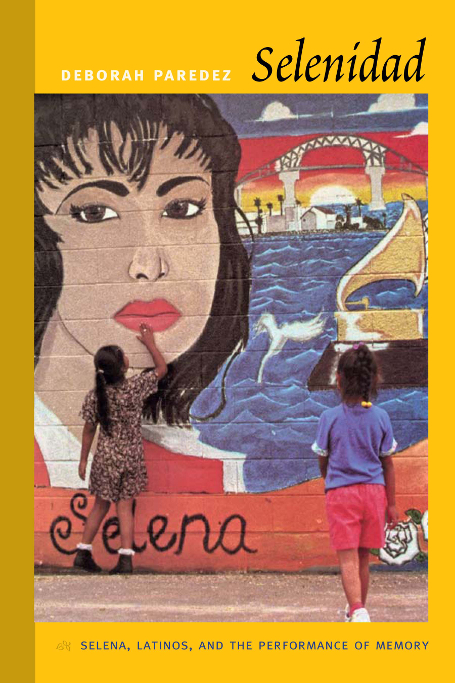 An outpouring of memorial tributes and public expressions of grief followed the death of the Tejana recording artist Selena Quintanilla Pérez in 1995. The Latina superstar was remembered and mourned in documentaries, magazines, websites, monuments, biographies, murals, look-alike contests, musicals, drag shows, and more. Deborah Paredez explores the significance and broader meanings of this posthumous celebration of Selena, which she labels "Selenidad." She considers the performer’s career and emergence as an icon within the political and cultural transformations in the United States during the 1990s, a decade that witnessed a “Latin explosion” in culture and commerce alongside a resurgence of anti-immigrant discourse and policy.

"[T]his invigorating example of interdisciplinary Latina/o scholarship goes beyond Selena and models a methodological and theoretical technique that embraces and enunciates the melancholy, joy, and intellectual integrity of its subject(s)." — Priscilla Peña Ovalle, Theatre Journal

"What is certain and undeniable about Corpus Christi's most famous daughter is this: What we can now never know about Selena's rising star reveals other truths after her death... For the decade-long project, Paredez... did painstaking research, including interviewing the young women who auditioned for the title role in the biopic and stage versions of her life story. She looked as well into the ways in which young girls still adopt the ‘everyday ways’ of Selena's style." — Yvette Benavides, San Antonio Express-News

"Deborah Paredez’ study on Selena’s posthumous importance is well written, engaging, and timely. She reveals the cultural, political, and economic dynamics of some commemorations of Selena. She further explores the reactions of Latinos and mainstream Americans after Selena’s death. Selenidad enables—if only for a moment—a sense of belonging to communities of the living. A great and easy read coupled with a selection of interesting photographs." — Anna Hamling, Feminist Review blog