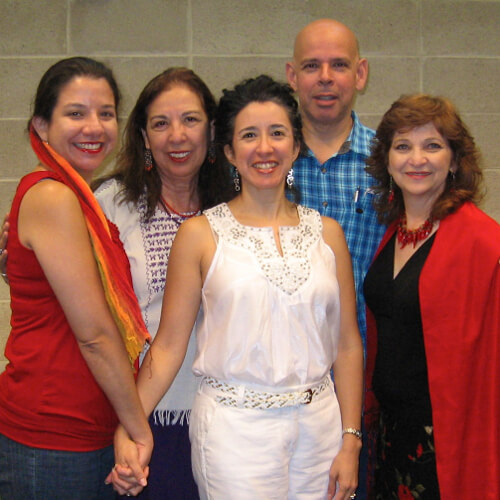 In the summer of 2009, Deborah Paredez joined fellow Tejana/o poets, Norma E. Cantú, Celeste Mendoza, Pablo Miguel Martínez, and Carmen Tafolla around Norma's kitchen table and dreamed of a world where Latinx poets could regularly gather in a community of creative inspiration and mutual support. They dreamed of and then set about building a "song-world," a canto-mundo, and by the next summer they were hosting their first writing retreat for Laitinx poets

CantoMundo is a national organization that cultivates a community of Latinx poets through workshops, symposia, and public readings. Founded in 2009, CantoMundo hosts an annual poetry workshop for Latinx poets that provides a space for the creation, documentation, and critical analysis of Latinx poetry

Inspired by Cave Canem and Kundiman (organizations for African American and Asian American poets), CantoMundo issues a national call for applications every year and selects new fellows who, once accepted, are eligible to return to the annual writing retreat up to three times, thereby fostering long-term support and collaborations. They join returning fellows who are fulfilling their three-year commitment and who provide mentorship and guidance to the incoming fellows.

CantoMundo's first gathering convened in 2010 at the National Hispanic Cultural Center in Albuquerque, New Mexico. From 2011-2016, the workshops were held at the University of Texas at Austin, and from 2017-2019, the workshops were held at Columbia University. CantoMundo has received support from the National Endowment for the Arts, the Academy of American Poets, the University of Texas's Center for Mexican American Studies, Columbia University's Division of Arts and Sciences, and the Poetry Coalition.

CantoMundo is currently based at the Poetry Center at the University of Arizona.