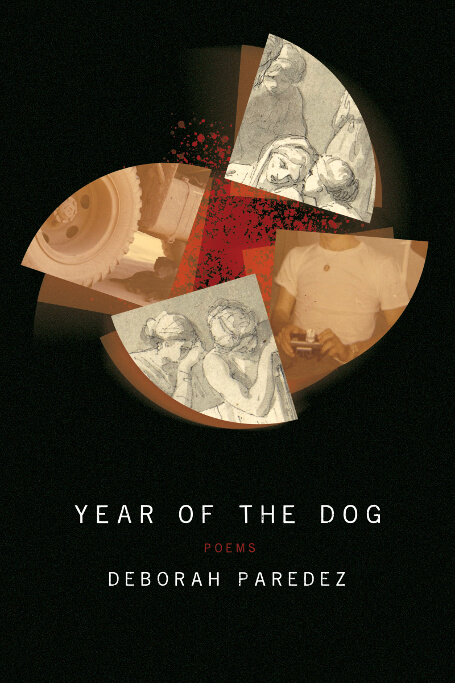 "Deborah Paredez’s book The Year of the Dog presents a palimpsest of grief howling at the exposed face of Empire. Mixing myth, memory, image, and textual documentary, her verse invents, fragments, constructs, and disfigures. Collectively the poems speak with chilling and touching clarity as they address systemic brutality and militarized power in service to state, nation, and whiteness. This book is fierce, moving, and necessary." - Hoa Nguyen

"Deborah Paredez’s Year of the Dog refuses to lay static on white space. Time is a character in this engaging collection, beginning in the tumultuous late ‘60s and reaching into now, today. Each poem becomes lyrical evidence laid before us—personal—and reckoned with. One feels the timeline has been lived. Yet, borders are crossed, fences jumped, and experimental detours—even graphic renderings—hold it all together. The echo of war and protest lingers. Paredez’s Year of the Dog is a song for now, as one confronts recent history through needful reflection." - Yusef Komunyakaa

"Deborah Paredez’s new collection, Year of the Dog, is a hauntingly beautiful collage, poems that move seamlessly between the close-up, intimate detail to a bird’s-eye view of history—like looking at one small segment of a large canvas then stepping back to take in the whole arresting sweep of it. Here, what it means to contend with grief, to live in the aftermath of national and personal trauma—the casualties and collateral damage of war and injustice—is in the hands of an unflinching witness. This is the inheritance of a poet born in the year of the dog: bound to the duty of remembering and to singing the names of the dead and the living in a voice turned again and again "into something essential." " - Natasha Trethewey